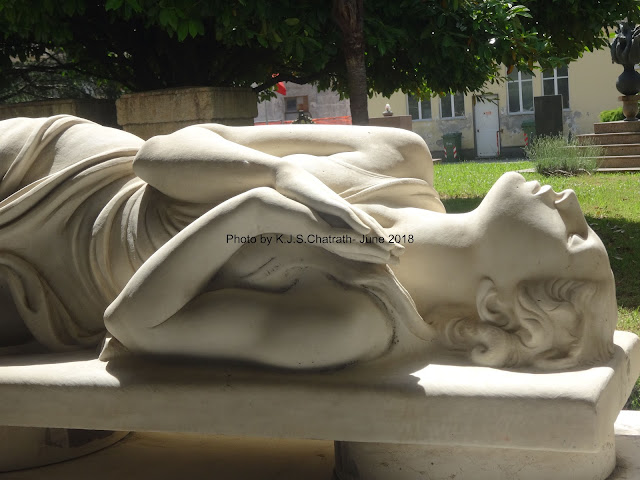 I have visited a large number of christian cemeteries the world over and found some of those to be very beautiful. But the three Italian cemeteries that I visited earlier in June this year, were the best that I have seen. Almost each grave is a piece of art and these cemeteries look like open air art museums.....Look at one such grave from Genoa cemetery....More, many more photos and a write up follows soon on my websites www.gravematters.in and www.fiftyplustravels.com as well as on my blog www.gravematters.blogspot.in.... 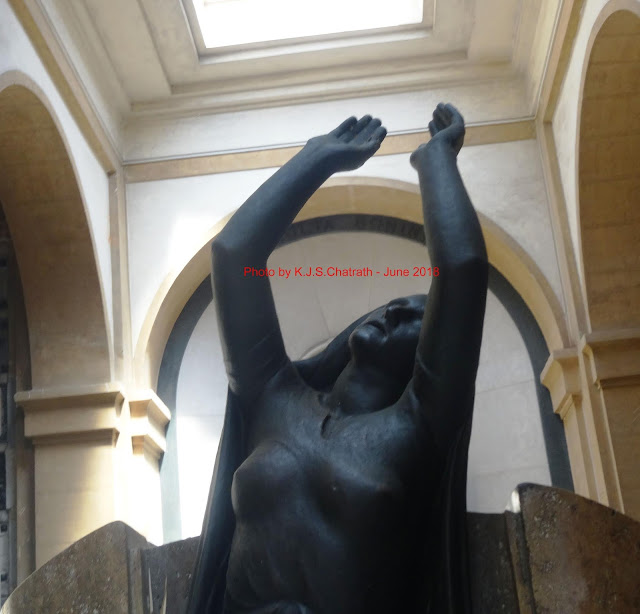 The 1st of November is a national holiday in Italy, known as Tutti i Santi or Ognissanti, which celebrates all saints and is followed by All Souls Day on the 2nd of November, a day devoted to honor loved ones who have passed away by going to the cemetery to pray, bringing candles and flowers to their tombs. 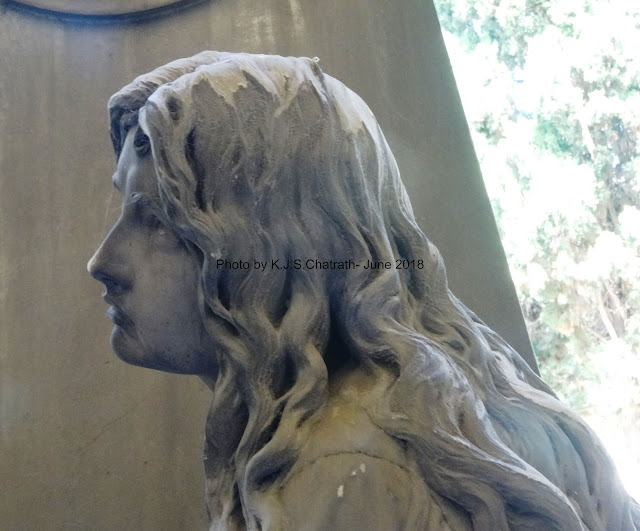 The standard cemetery in most Italian towns and villages is a walled enclosure on the outskirts of cities and towns owned by the local council rather than the church. While in the past dead people were buried in several different ways, Napoleon introduced the current practise of urban cemeteries with the 1804 Edict of Saint-Cloud which forbade burials in churches and towns for reasons of hygiene and to reduce the chance of spread of disease from the over crowded cemeteries. 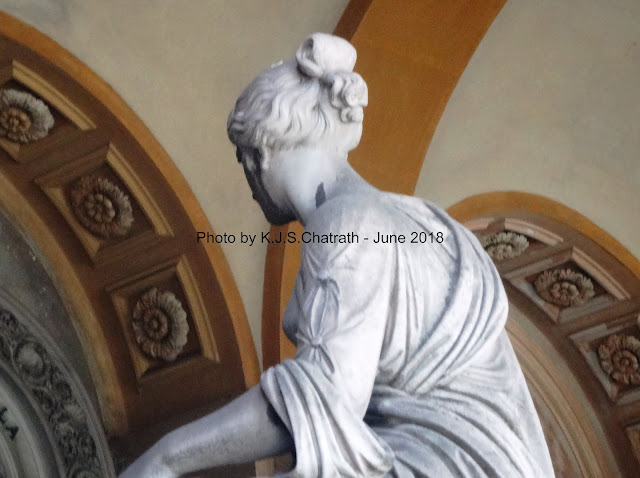 Today, most Italian cemeteries consist mainly of multi-storey rows of concrete vaults, sealed with a marble plaque with a small photo of the deceased in life. However, over the years, many people commissioned architects and artists to design special chapels and tombs for them, so many Italian cemeteries have now become open-air museums of funerary art and are known as Cimiteri Monumentali (Monumental Cemeteries). 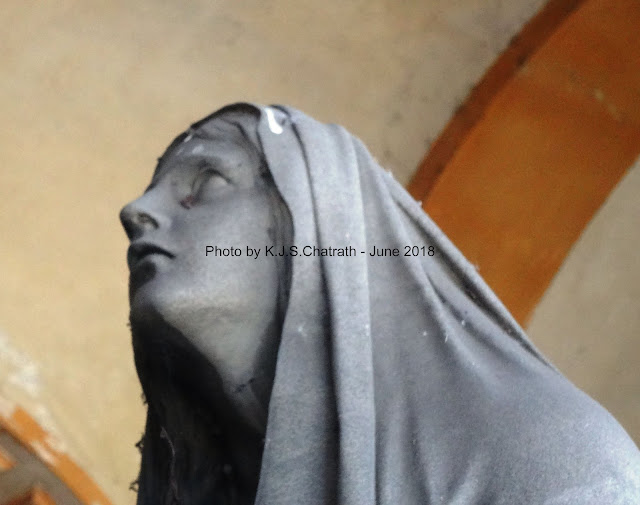 The Cimitero monumentale di Staglieno in Genoa, Liguria, located on a hillside in the district of Staglieno is famous for its monumental sculptures. It represents for the  Geonese people, not only a place of remembrance, but also a a meaningful historical and cultural heritage. The Municipality of Genoa, aware of the importance of the historical and artistic patrimony housed in Staglieno, a real open air museum, has undertaken numerous projects aimed at restoring and highlighting the many works of art which had made Staglieno famous in Italy as well as abroad.

As explained by Mr. Giorgio Guerello, the City Councillor in the Guide published by the Commune,  the booklet suggests visitors some striking thematic routes inside the cemetery; the Risorgimento, the Angels, the allegories of Charity and Beneficience and the emotions.

Covering an area of more than a square kilometre, it is one of the largest cemeteries in Europe. The original project was approved in 1835 by the City's architect Carlo Barabino. However, he died the same year as a result of the cholera epidemic that struck the city and the project passed to his assistant and pupil Giovanni Battista Resasco. Work began in 1844 and it was opened on 2 January 1851. At the time Genoa was a major centre of learning within Italy and attracted reformists and an affluent bourgeoisie. Wishing to place long-lasting memorials to remember their work and moral accomplishments, they developed a tradition of funerary art, realistic sculptures in particular, to be placed on their tombs. The cemetery contains the tombs of Oscar Wilde's wife Constance Lloyd, Ferruccio Parri, Fabrizio De André, Nino Bixio, and Giuseppe Mazzini. 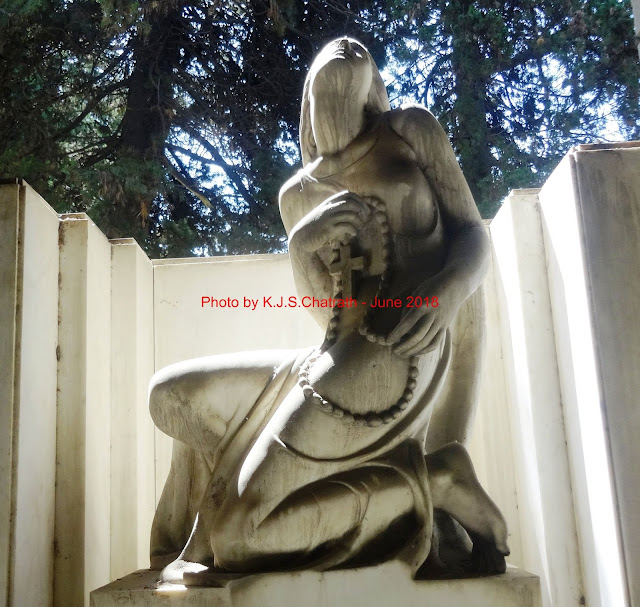 Mark Twain visited while he was in Genoa and wrote: “… We shall continue to remember it after we shall have forgotten the palaces. It is a vast marble colonnaded corridor extending around a great unoccupied square of ground; its broad floor is marble, and on every slab is an inscription—for every slab covers a corpse. On either side, as one walks down the middle of the passage, are monuments, tombs, and sculptured figures that are exquisitely wrought and are full of grace and beauty. They are new and snowy; every outline is perfect, every feature guiltless of mutilation, flaw, or blemish; and therefore, to us these far-reaching ranks of bewitching forms are a hundred fold more lovely than the damaged and dingy statuary they have saved from the wreck of ancient art and set up in the galleries of Paris for the worship of the world.” 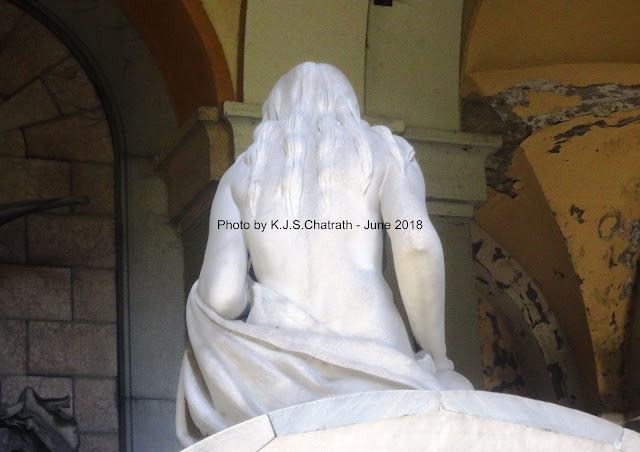 The art of the cemetery is closely tied with the emergence of the Realist art movement in the 1850s. Now it is famous for its weeping angels and sorrowful widows as well as its eerily lifelike depictions of the bereaved and the deceased in contemporary clothing, which have earned the nickname “the talking statues.” 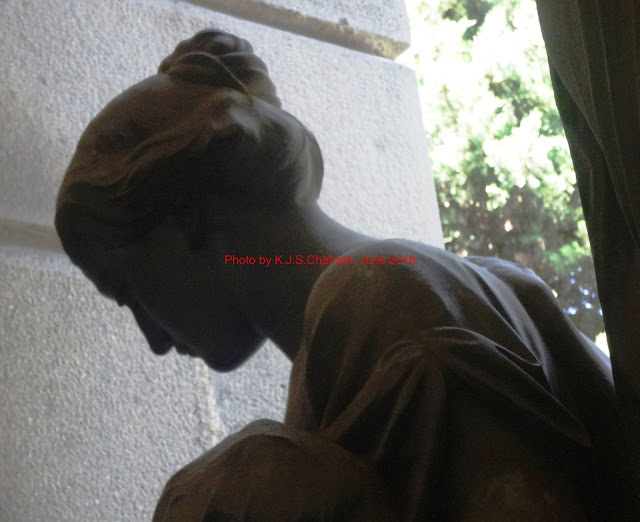 By the late 1800s, the cemetery had become not only a popular burial place, but also a tourist attraction with guided tours and booklets.

(Text sourced from http://www.italymagazine.com/featured-story/top-ten-italian-monumental-cemeteries  ;  https://www.atlasobscura.com/places/cimitero-monumentale-di-staglieno   By Annetta Black ; ) ; 'Itineraries in Staglieno', edited and published by the Commune of Genoa, Italy )
Posted by chatrath@gmail.com at 10:18 PM